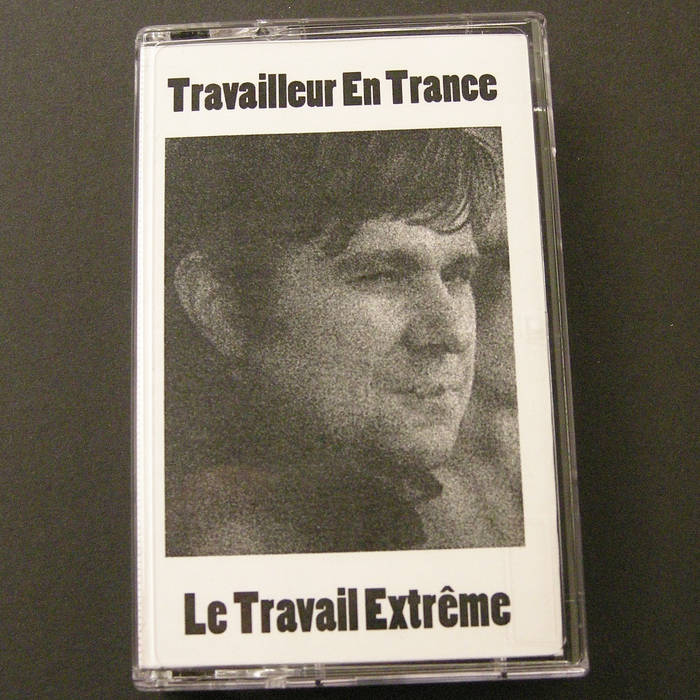 "What a great idea, I would really love to get this!! If only I hadn't dumped my tape deck back in the 90s! :-(" Again and again we heard this comment, ever since TET's new radical retro homage to the tape scene "Le Travail Extrême" came out in May 2016 on cassette only. We hadn't expected that virtually no-one still owns a tape deck - we still do! ;)

And since it really makes no sense to release music that nobody can listen to (and this one-synth production was really fun), the decision was made to ease up a bit on the tape exclusivity of the music.
Firstly, there will still be no downloading and streaming of this release!

Secondly, the remaining few tapes of the 12 units (!) limited edition will now include your personal audio CD-R with the tape content, numbered correspondingly to your tape.

To stress that "Le Travail Extrême" is actually still a tape release, the plain white CD has no artwork or cover. It's only carrying the audio data.

Although you now get tape, sticker, anniversary card AND the CD-R, the price, paying tribute to the year of TET - Travailleur En Trance's founding, remains the same!

Those who previously ordered the tape contact us to get their personal CD-R delivered for free!

A very unusual collector's item: NEW (2016) and extremely limited retro cassette tape by TET-Travailleur En Trance, created on their original 1993 equipment ONLY: A single synth, ancient Atari sequencer software and guitar stomp boxes for rough vocal effects.
Going back to a raw and pure approach to EBM energy, unedited recordings like old days, using only deep retro equipment , TET are pretending it's 1993 all over again!

On their first tape release since 1994, they are once again joined by Claus Kruse (PNE) to cover one of his and CS/TET's favourite EBM classics.

It's a 100% analog release. Only 12 numbered copies will ever be available on TDK chromium dioxide tape. There will be no digital download or streaming release of these track versions ever, except for a free short teaser online.

Along with the tape, you get two additional limited items: An "outer booklet" TET anniversary card (signed and numbered), and a TET logo sticker "Le Travail Extrême". For more information about shipping contents, check the detailed info text.

Four years ago, TET had an idea for a special release on occasion of their 20th birthday in 2013: Releasing a new tape done strictly on old equipment ONLY, leaving aside their usual armada of sound generators and going back to where it all started, thriving for raw energy in its pure state!

Blank tapes had already been purchased, but due to the excessive amount of time it took to complete their 40 track/4 hours 3CD album set "CODE ULTIMATE CONTROL", the idea was postponed. Doing a new tape required re-activation of old TET equipment that had been stowed away for years, so sufficient time was needed.

Now we have 2016, and it seems the tape scene is even receiving some new recognition. So now seemed like the perfect moment to finally do it! Therefore, in autumn and winter 2015/16 new oldschool TET sessions took place - exactly the old way. The same one synth, a cheap YAMAHA SY22 entry-level rompler, the same (still working!) Atari ST, running the same "Creator" sequencer software, they used when they started recording tapes in 1993. And CS/TET's vocals were once again processed using the same old guitar stomp boxes for maximum roughness. To put it short, TET were pretending it's 1993 all over again!

The only old hardware that didn't work completely was TET's old Ensoniq EPS 16+ sampler (used live from their first gig on), so its way of sampling and looping had to be emulated. But with all of those movie samples originating from ancient VHS tapes, they're on the same authentic retro level for sure! All work was stored on diskettes of an ancient type that is long out of production.

In this manner, lots of new, aggressive TET retro-style tracks were created from scratch, not using any newer knowledge than TET had in May 1993 when they just started. Same machines, same sounds, same approach = same energy.

On top of that, TET-Travailleur En Trance are even joined by Claus Kruse (PNE) to cover one of his and CS/TET's favourite EBM classics!

As a real TET tape, it shares all the core characteristics of TET back in the tape days, which were:

- Raw and fast production (TET released 5 tapes in only 2 years 1993-94!), evoking the pure, unfiltered energy of the past
- Direct and raw lyrics written within minutes, while still covering all topics typical of TET: Combat, cyber, occasional monsters, justified manhunts...
- English, German and French lyrics, combined in a wild and reckless mix
- Spontaneous vocal modulation and barely timed extra shouts, never edited to be perfect, usually recorded in 1 take, except when one of the ancient fx boxes failed temporarily...
- Mostly German VHS action C-movie samples - since back in 1993, TET's only source for samples was German TV

- Faithfully revisiting old classics: TET go back to the "Arbeiter" theme one last time: "Arbeiter 3 : Das Ultimatum" is the final part of a series that started with "Arbeiter der Stirne/Arbeiter der Faust" in 1993 and continued on to "Gegen An - Arbeiter 2" in 2008. Using a ton of samples, TET-Travailleur En Trance become the authentic voice of the working class once more!

WHAT YOU GET:
- 1 out of only 12 hand-numbered tapes "Le Travail Extrême". Each copy is manually manufactured on demand on a high quality Technics tapedeck in perfect condition. No auto-reverse is used. The music is recorded onto a brandnew TDK SA CHROMIUM DIOXIDE CrO2 tape (which have become quite expensive, since they're out of production).

- 1 out of only 12 TET retro design stickers "Le Travail Extrême" with TET logo.

Attention: Creating your tape on-demand obviously takes a little longer than taking a CD out of a box, so please allow up to 3 days until it's ready to be sent.